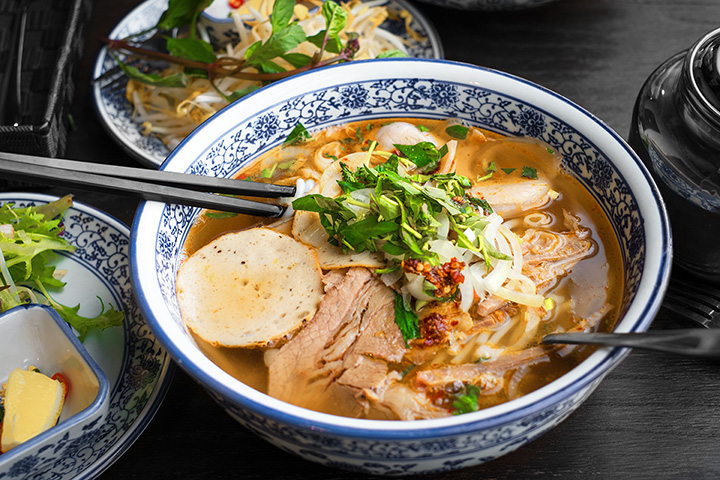 If you’re not someone who eats Vietnamese food on a regular basis, you may not be familiar with the delish dish referred to as pho. Pho is a Vietnamese soup consisting of broth, rice noodles, herbs, and meat. This incredibly flavorful and refreshing meal is served up expertly throughout Indiana. Whether it's your first time trying it or your tenth, check out these 7 amazing pho spots in the state.

Cre-Asian in northern Fort Wayne, Indiana has become a staple for residents and visitors alike. It’s a great place for a date or to catch up with friends, or as a semi-late dinner for Notre Dame students in the area. The restaurant is well known for their pho noodle soup which come in generous portions with a make your own variety as well as specialty pho bowls, including the pho satay, pho chicken soup, and the pho pork chop.

The Rush Hour Station was originally founded in 2011 as a grocery store but was quickly converted into a restaurant in 2012 to feed the hungry in southern Bloomington. No matter what you choose, you can be sure you’re getting food that is fresh and made to order every time. You’ll also find their pho soup selections come with not only scrumptious ingredients but also some interesting names, such as the Smile From the Soul Tofu Pho, the Your Path Has Many Meatballs Pho, and the Home Wrecker Vegetable Broth Spam Pho.

Egg Roll #1 is the best place in Indianapolis for some great pho! From the service to the food, everything about Egg Roll #1 is amazing. Their portions are quite filling, and there are a variety of options to choose from, including the pho ga (chicken rice noodle soup) or the pho xe lua which is a big bowl (and by big they mean BIG) combination of beef with rice noodle soup. There will be plenty of leftovers with this one!

Green Leaf is traditional Vietnamese at its best, featuring fresh, healthy ingredients. Their Green Leaf Signature pho bowl is most popular, with round eye steak, flank, tripe, beef meatballs, and chicken and shrimp in a yummy broth. Another great option is the regular shrimp pho bowl.

From the far away country of Vietnam straight to your stomach! Totally authentic and one hundred percent mouthwatering is the food at Chao Viet Street Food in Fishers. Located just outside the big city of Indianapolis, visitors will find the food is here not only fast in terms of service but also healthy! For the vegetarians who enjoy a great bowl of pho, be sure to try the vegetarian pho, made with one hundred percent vegetarian broth and a delightful mixture of vegetables.

Sandra Rice and Noodles, Indianapolis, IN

Sandra Rice and Noodles has a bittersweet story behind this incredible place. Siblings Ha Nguyen and her brother, Sang, were separated when Ha immigrated to Indianapolis in the mid-1970s during the revolution in Vietnam. After 20 years they were reunited and began their joint career in the hospitality industry. After a series of obstacles, Sandra Rice and Noodles (named after Ha’s only daughter), came to be in April 2007. Most popular pho dishes are the chicken pho and beef pho. Simple, yet utterly tasty.

Asparagus is a unique, Asian fusion restaurant and lounge rooted in authenticity and business. The environment is that of elegance, serenity and Zen featuring flavorful dishes from places such as Thailand, Vietnam, and America with a French twist. They have three different pho dishes to choose from: pho ga (chicken), pho tai (beef carpaccio), and pho tom (shrimp). With every bite you can taste the culture behind the cuisine and the love that goes into each dish.