The 9 Best Steakhouses in Indiana! 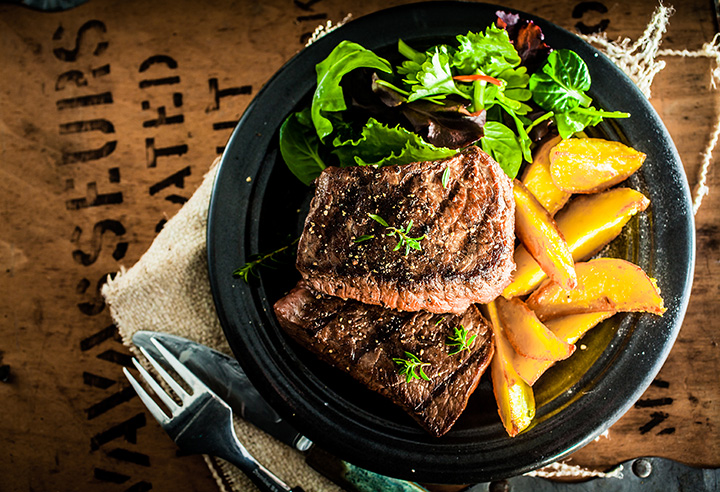 If there is one thing Hoosiers love more than tenderloin, it is a nice, juicy steak. Whether you prefer it well done, medium, or completely rare, there are so many steakhouses to choose from. Here are the 9 best steakhouses in Indiana.

Mountain Jacks Steakhouse in Lafayette, Indiana, is known for three things: having the best steak, the best filet mignon, and the best prime rib that Indiana has to offer! Just looking at the menu is enough to make your mouth water, but once you taste the deliciousness that is Mountain Jacks, you will be in heaven. It’s easy to see (taste) why Mountain Jacks has been Lafayette’s favorite restaurant for over 30 years. The best part about the restaurant is its cozy, yet casual atmosphere, complete with three beautiful fireplaces throughout. The steaks are hand cut and everything is in house using only the best of the best of ingredients. Come as a guest, leave as a member of the family!

Stables Steakhouse in southern Terre Haute, Indiana, is breathtaking. The food is legendary but it’s the structure of the building you notice upon walking in. The place gets its name from the fact that the building originally was a turn of the century stable. Made of brick and poplar, one can’t help but stare in awe at the beautiful wooden beams on the crafted ceiling. The ribeye is fantastic, and when each dish is paired with one of their delicious wines, the Stables Steakhouse is heaven on Earth!

The Baker Street Steakhouse in Fort Wayne, Indiana, is one of class and elegance. Each item on the menu is a work of art and almost too beautiful eat. The front of the building is solid brick, and you feel as though you’ve stepped through time. The filet mignon is tender yet crisp, and is served over a delicious batch of garlic whipped potatoes (homemade of course), and on the side, there is a beautiful set of asparagus drizzled with soy vinaigrette. Feeling hungry yet? One can tell that each item has been made with the customer in mind.

The story behind Harry and Izzy’s in Indianapolis is one for the ages. Owners Harry Roth and Izzy Rosen were best friends from the age of ten. Many remarked that they were the quintessential “Odd Couple” before the Odd Couple was a thing. It’s a beautiful story of friendship, and one that brought downtown Indianapolis its most beloved steakhouse. Their steaks are 100 percent black angus beef, raised in the upper Midwest and aged to perfection. Each steak is served with fresh cut fries, redskin mashed potatoes, or sautéed green beans. Each plate is a thing of beauty. For those of you who have a gluten intolerance, they also have a gluten free menu as well and it is just as delicious!

Sullivan’s Steakhouse has been serving the Indianapolis area since 1996. A neighborhood favorite, Sullivan’s is vibrant and comfortable, featuring some of the finest steaks, wine, and live music. It’s the perfect place for a Friday or Saturday night. The Fresh Market Greens is delicious, as well as their New York Strip steak. For dessert, try the New York-style cheesecake. That’s right. They have cheesecake and it is the best!

Fogo de Chao is Brazilian food at its finest! The founders of Fogo de Chao grew up on a traditional farm in the Serra Gaucha and it is there that they learned how to cook and perfect their technique before leaving in 1975. The first Fogo’s was founded in 1979 in Porto Alegre. Eight years later, they opened another location in Sao Paulo. The U.S. saw its first Fogo de Chao in 1997 in Dallas, TX. Over the years, more locations grew and grew as the popular Brazilian flavor became more in demand. Fogo de Chao in Indianapolis is in the heart of downtown Indy, and its most popular selection is the Market Table and Feijoada Bar. Here you can choose from a variety of delicious selections of food that will take your taste buds on a cultural journey.

Located in northern Indiana, Shorty’s Steakhouse boasts some of Indiana’s finest steaks in the Midwest. The menu isn’t quite as extensive or in depth as some other steakhouses in Indiana, but sometimes simple is always better. The steak and spinach salad is light yet filling, and one must try the top sirloin with a side of wild rice and the vegetable of the day. You should also have one of their delicious drinks to go along with your meal, whether it be a Cocoa Dream in place of dessert or the Pretty in Pink. The Island Envy is also envious indeed!

Kelsey’s Steakhouse in Valparaiso, Indiana, was voted best in the region five times for its welcoming atmosphere, and it’s easy to see why. When you arrive at Kelsey’s, you will feel an instant warmth for this beautifully remodeled restaurant. It’s warm and inviting, yet casual and relaxed. Kelsey’s has been serving up some of the best steaks in northwestern Indiana for over 20 years, so stop on in and say hello! The food is reasonably priced and whatever you choose, whether it be the prime rib or Kelsey’s Famous prime rib, you won’t be disappointed!

Freddy’s Steakhouse in Hammond, Indiana, has a been favorite among Hammond residents and Indiana residents for almost half a century. They have quality steaks and fresh, baked bread and delicious desserts. Their motto is “Come for the food, stay for the fun!” and what fun it is indeed! The owners and staff are as friendly and as welcoming as can be, making you feel like one of the family. It’s Hoosier hospitality at its finest! Each dinner entrée includes a relish tray, tossed salad, soup and bread basket with honey butter. You won’t know where to start first when it comes to eating at Freddy’s!