The 10 Best Museums in Indiana! 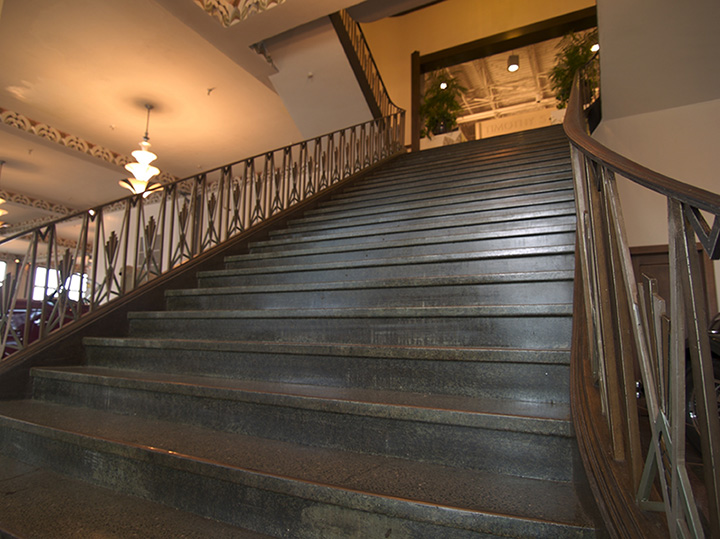 Indiana has a wide range of museums within our borders, from the world's largest children's museum to a one-house museum devoted to one single man, but they all have one thing in common: they are rich resources of fun, learning, and memories.

The Indiana State Museum, Indianapolis, IN

At the top of Indiana's list of best museums is, of course, the Indiana State Museum. Learn about the history of Indiana's statehood, our founders, our constitution, and some very famous historical figures who have called Indiana their home throughout our 200-year history (proudly two centuries old as of December 2016!). Exhibits devoted to the flora and fauna of Indiana both now and then, as well as what the terrain of Indiana used to be and why the northern half of the state is so much flatter than the southern, offer a rich understanding of our proud little state and, well, why we are the way we are. But…what captures most people's attention (for minutes on end) is our Pendulum Clock. There is no mechanism of timekeeping except the rotation of the earth. This brilliant work of both science and art is an attraction all to itself, and you'll be mesmerized by just how long it takes to “knock a block over.”  No description does it justice: you'll have to see it to believe it.

The Eiteljorg, Indianapolis, IN

The Eiteljorg Museum of American Indians and Western Art, or The Eiteljorg, is an extensive and impressive collection of North American Native art, artifacts, and history. Having been listed among the world's best art collections (the website doesn't say by whom), the museum is home to collections and exhibitions of both ancient and contemporary Native American art and artifacts, but also of the Old West of “cowboys and Indians” fame. You can use the museum calendar to plan your visit around their Artists-in-Residence program: for a period, the museum will host an artist (usually of Native descent) who specializes in a medium of art from that culture. From basketry to ceramics to Navajo weaving, even to Inuit throat singing, so far 16 artists-in-residence have been sponsored to share their art forms with museum guests. In addition to their current collections, specific exhibitions also make their temporary homes at the museum to enrich your experience.

This is more of a historic site than a full museum, but if you'd like to see Indiana's very first state capital (1816-1825), visit Corydon, Indiana, and see the old capitol building, the old governor's mansion, and the Constitution Elm Memorial that preserves the trunk of the elm tree that shaded Indiana's founding fathers as they discussed Indiana's statehood and her governing document. You can also see a tavern, the outside of Corydon's oldest extant building (but somebody actually lives there...you'll have to content yourself with just admiring), and the old school for black students before desegregation reached Indiana. Amid the early 19th century architecture and the hills of southern Indiana, not far from the Ohio River, Corydon sits as a living relic to the birth of the Hoosier State. Surround yourself in the inspiring history of Indiana's infancy when you visit Corydon, the first state capital.

All the world's a stage, and every Memorial Day weekend, Indianapolis takes center front for the Greatest Spectacle in Racing. The Indianapolis 500, a legend in and of itself, deserves its very own museum, and there is one. At the Indianapolis Motor Speedway, a 30,000-square-foot space houses automobiles of both racing and consumer fame, most notably a collection of IndyCar, Formula One, NASCAR, and Sprint cars, as well as a collection of other motor vehicles that have set and/or broken world speed records. The Hall of Fame is the Mount Olympus of auto-racing, where the titans of the sport live on in honored places on the wall. The auto-racing fan's dream has come true…a museum devoted entirely to the Greatest Spectacle in Racing.

History comes to life at Conner Prairie! A field-trip favorite for schoolchildren across the state and regional Midwest, the Conner Prairie Living History Museum offers experiential learning of day-to-day life in 1836 Indiana. Tour the historical homes, try your hand at candle making at the chandler's workshop, sit through a primary school lesson, and learn how gardens and animals were kept with heirloom techniques. Recent additions to the living history experience include hot air balloon rides and a Lenape Native American camp with even more interactive learning. Halloween and Christmas also see the park festooned with decorations and interactive celebrations of the era. But if trekking across the campus through the “quaint village” just isn't your thing, then you're welcome to pay a very pretty penny for one of the ritziest and most-famed events of an Indiana summer: “Symphony on the Prairie.” Sponsored by Marsh Supermarkets and performed by the Indianapolis Symphony Orchestra, “Symphony on the Prairie” is held annually at the Conner Prairie Amphitheater, a natural sound-enhancing landform on the museum's campus.

Fairmount, Indiana, is the birthplace of the Rebel Without a Cause, James Dean himself. Although Gas City's James Dean Museum has since closed, the gallery in his hometown is still open and ready for you. Thousands of collectibles and artifacts from his life as well as the era in which he rose to fame are arranged within the ornate home. In the screening room (a mini theater), you can view clips of his famous roles, in another you can see the famous bust of the actor, and in yet another you can see extant samples of James Dean's art. The classic film fan will love being surrounded by everything James Dean, including the Rebel Rebel gift shop.

Formerly known as the Ball State Art Museum, the large collection of fine, classical, antique, and modern art in multiple media has since been renamed in honor of David Owsley, whose personal art collection composes a large number of the gallery's pieces. The gallery spans an impressive range of history, from ancient Asian and Greco-Roman artifacts to Renaissance to the 17th, 18th, and 19th centuries, all the way up to contemporary works of both classic and recycled media. It is described on the website as the only east-central Indiana museum with a well-rounded collection of art, artifacts, and sculpture, with over 11,000 individual pieces. The building itself is a work of art, a Gothic structure completed in 1935 and renovated just after the turn of the millennium, and the grounds in front of the glorious structure are known as The Quad, a path-laced mini forest with lush grass and small wildlife at play.

Antique car enthusiasts view the Auburn Cord Duesenberg Automobile Museum in northern Indiana as the mecca of vintage automobiles. Not only are about 120 antique cars and artifacts housed and carefully preserved in the beautiful building, which was opened to the public as a museum in 1974, but the mezzanine also holds a fine art gallery of auto-related art, an archive, and a library. Once a year the week before Labor Day, the city of Auburn hosts the ACD Festival, called the World's Greatest Classic Car Show and Festival by the festival's website. So, if you'd like to get a little more out of your museum visit, you can plan to partake in the many festival activities, including a wine tasting.  Just don't expect to be allowed to drive one of the antique cars after you've been to the wine tasting.

The Minnetrista Museum & Gardens, right next door to Ball State University campus, is a combination museum and learning park. The museum holds collections of artifacts of local history, especially that of the Ball Brothers of Ball jar fame. On the grounds of campus are gardens of heirloom varieties of foliage and flowers with specific attention to heirloom gardening techniques and plant care. On location, you'll also find the Ball Mansions, the beautiful Victorian houses once owned by the five Ball brothers and now turned into house-museums, as well as the bronze statue “Appeal to the Great Spirit,” a memorial for Edmund Ball by his widow, the famous Bertha C. Ball for whom the on-site Edmund and Bertha Ball Art Center is named. The first weekend of December sees the entire Minnetrista campus glowing with luminaries and bedecked with Christmas decorations for the Enchanted Luminaria Walk, a Muncie Christmastime tradition.

Over 120,000 artifacts and specimens are housed on the 29-acre campus within the 472,900 square-feet of building space, making it the world's largest children's museum. Exhibits come and go, the museum having hosted the Anne Frank exhibit, Sue the Tyrannosaurus Rex, world-renowned Egyptologist and Egyptian Antiquities Director Dr. Zahi Hawas, and the Terra Cotta Army, but permanent fixtures at the museum include the World Cultures Collection which houses a tomb figure of Pharaoh Seti I, samurai armor, and Native American art and clothing, just to name a few. In addition to history and culture, the CMI also holds a science center and planetarium, a playhouse where imaginations run wild, and the famous carousel of wishes and dreams, built from recovered and restored animals from the original Broad Ripple Park carousel built in 1917. When you first come in the door, however, you can't miss the Water Clock, a timepiece marked by the flow of colored liquids denoting the minutes and hours. There is so much to discover at the world's largest museum for young people…come experience the Children's Museum of Indianapolis for yourself!

3045 West Vermont Street, Indianapolis, IN
The Indiana Medical History Museum is located in the Old Pathology Building on the grounds of the former Central State Hospital on the near westsid... Read More

850 West Michigan Street, Indianapolis, IN
National Art Museum of Sport (NAMOS) is America's premiere sport art museum. The Museum is located in Indianapolis, IN and is solely funded by dona... Read More

1230 North Delaware Street, Indianapolis, IN
Mission: The mission of the President Benjamin Harrison Foundation is to increase public understanding of, appreciation for, and participation in... Read More

500 West Washington Street, Indianapolis, IN
Our StoryThe Eiteljorg is much more than a traditional art museum with pretty pictures and impressive sculpturesThe Eiteljorg tells the stories of ... Read More

216 East South Street, Indianapolis, IN
Mission To stimulate minds with contemporary exhibitions and expand the cultural landscape of Indianapolis. About iMOCA aims at increasing the u... Read More

13400 Allisonville Road, Fishers, IN
Conner Prairie Interactive History park invites families of today to engage, explore and discover what it was like to live and play in Indiana&rsqu... Read More

135 North Main Street, Franklin, IN
The Johnson County Museum of History was started in 1931 by the Alexander Hamilton Chapter of Daughters of the American Revolution.&... Read More

1500 North Reed Road, Kokomo, IN
The Kokomo Automotive Museum Foundation is a nonprofit 501(c)(3) organization, governed by a Board of Directors.Think about the impact that automob... Read More